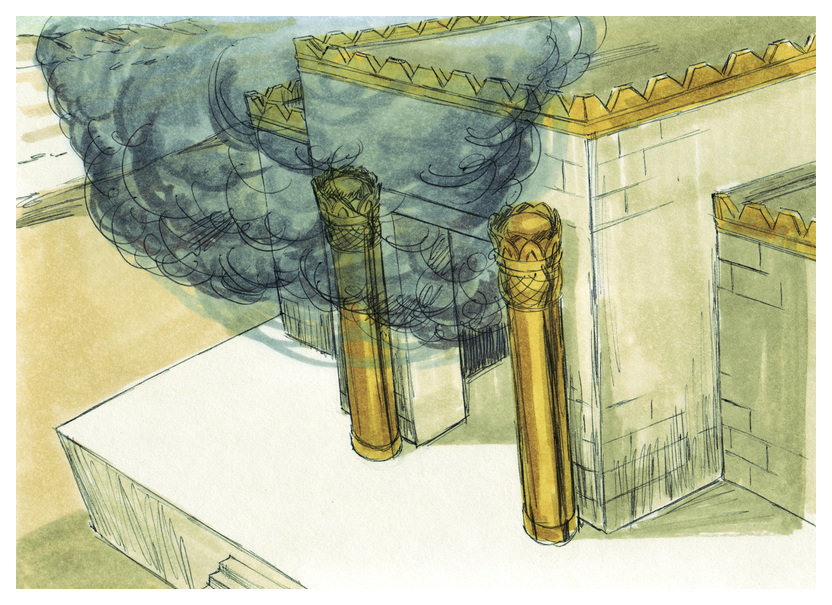 Solomon built a temple that was regarded as one of the wonders of the ancient world. It was a magnificent and awe-inspiring structure. The Temple conveyed the sense of the glory and Majesty of God.  The design for the Temple was given to David by the Lord and David instructed Solomon to build according to the divine pattern that he was shown (1 Chronicles 28:11-12, 19-20). This means that whatever Solomon built was what David had received and not an afterthought.

God often speaks in pictures because He wants His people to remember what He has said. We are told that there were two bronze pillars at the entrance of Solomon’s Temple (1 Kings 7:15-22). One was named Jachin while the other was Boaz. Jachin (pronounced yaw-keen) means “He establishes,” while Boaz means “In Him is strength,” or simply “In His strength.” When you put the two names together you literally have “He will establish in (or by) His strength.” These highly ornamented pillars stood about 27 feet and could be quite visible even from a distance. The pillars were strategically located at the entrance of the temple to convey a message to a person coming to worship in the Temple. The worshipper enters the temple with the symbolic message of the pillars etched on his mind.

Jachin conveys the message that God establishes His people. As a person comes to worship God he must never forget that he is in the presence of One who has the power to establish him. God wants us to be “rooted and built up in Him and established in the faith…”(Colossians 2:7). It doesn’t matter what a person may be going through in life, God’s plan is “And after you have suffered a little while, the God of all grace [Who imparts all blessing and favor], Who has called you to His [own] eternal glory in Christ Jesus, will Himself complete and make you what you ought to be, establish and ground you securely, and strengthen, and settle you.” (1 Peter 5:10 AMP). Some people also interpret Jachin to mean ‘Security’ as The Message Bible translates our text: “He placed the pillars in front of The Temple, one on the right, and the other on the left. The right pillar he named Jakin (Security) and the left pillar he named Boaz (Stability).” (2 Chronicles 3:17). In the place of  worship we receive assurance that our security is in God (Psalm 127:1; 2 Thessalonians 3:3).

Boaz communicates to the worshipper that in God there is strength.  We come into the presence of God to receive or renew strength. He said: “Keep silence before Me, O coastlands, and let the people renew their strength!…” (Isaiah 41:1). We often expend spiritual energy in the course of our daily life, God’s presence is the place for replenishment. No wonder the Psalmist said “You lead me in the path of life; I experience absolute joy in your presence; you always give me sheer delight.” (Psalm 16:11 NET). And of course, the joy of the Lord is our strength (Nehemiah 8:10).

Boaz also expresses the means by which God establishes His people. It is in (or by) His strength. The worshipper understands that he would be established, not by his personal strength or ability but by God’s strength. We know that the strength  of the Lord is no other than the Holy Spirit. Paul’s prayer was “that He would grant you, according to the riches of His glory, to be strengthened with might through His Spirit in the inner man.” (Ephesians 3:16).

When we see the words “In His strength” we are reminded of what God spoke to Zerubbabel “So he answered and said to me: “This is the word of the Lord to Zerubbabel: ‘Not by might nor by power, but by My Spirit,’ Says the Lord of hosts”  (Zechariah 4:6). The Holy Spirit has been referred to as “The Executive Arm of the Godhead.” So, the means by which God establishes His people is “by my Spirit.”

Many of us have a dream, vision or prophecy and we are wondering how it will ever be established. That was Mary’s dilemma when Angel Gabriel informed her that she would have a Baby. She asked “how can this thing be?” How on earth can this be established since I am a virgin. The angel’s response was:  “And the angel answered and said to her, “The Holy Spirit will come upon you, and the power of the Highest will overshadow you; therefore, also, that Holy One who is to be born will be called the Son of God.” (Luke 1:35).

ESTABLISHED BY HIS STRENGTH

No doubt, this message would have resonated with a man like David. He experienced firsthand how God could establish a man. David didn’t have the pedigree to be a king. When Samuel came to anoint a king for Israel and requested that Jesse come with all his sons, David was not even considered as a viable candidate (1 Samuel 16:1-13). For several years after he had killed Goliath David was a fugitive. When it was suggested that he marry Saul’s daughter, this was how David described himself, “…’What are you thinking of? I can’t do that. I’m a nobody; I have nothing to offer.”’ (1 Samuel 18:23 MSG).

From the human point of view, David was far from living the prophecy of his life. Saul hunted him day and night. There were occasions when it seemed as if David wouldn’t survive. On one such occasion Saul had virtually closed in on David and his men. David was in a precarious situation but all of a sudden a message came to Saul that the Philistines had invaded the land of Israel. Saul had to abandon his mission and return to face a greater challenge (1 Samuel 23:18-28). No doubt, God orchestrated this event to save David.

We can see that the overall message that God was communicating through these pillars is that He is the One who establishes His people by the power of the Holy Spirit. He didn’t want them to lose sight of those symbolic pillars and the message they conveyed as they daily came into His presence to worship. Those pillars are also a divine statement to us today: God will establish us by His strength.