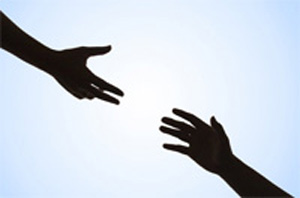 “One day David asked, “Is anyone in Saul’s family still alive—anyone to whom I can show kindness for Jonathan’s sake?” 2 He summoned a man named Ziba, who had been one of Saul’s servants. “Are you Ziba?” the king asked. “Yes sir, I am,” Ziba replied. 3 The king then asked him, “Is anyone still alive from Saul’s family? If so, I want to show God’s kindness to them.” Ziba replied, “Yes, one of Jonathan’s sons is still alive. He is crippled in both feet.” 4 “Where is he?” the king asked. “In Lo- debar,” Ziba told him, “at the home of Makir son of Ammiel.”” 2 Samuel 9:1-4 NLT

Mephibosheth was born in the palace and must have enjoyed the first few years of his life. His grandfather, Saul, was the king of Israel and his father, Jonathan, was the heir-apparent. Unfortunately, the circumstances of life conspired to send him to Lodebar where he lived in obscurity: crippled, poor and hopeless! His life became synonymous with the name of the place. Lodebar means “no pasture, barren, a desolate place.”

The story of his life dramatically changed following a tragedy that occurred when he was only five years old. “Saul’s son Jonathan had a son named Mephibosheth, who was crippled as a child. He was five years old when the report came from Jezreel that Saul and Jonathan had been killed in battle. When the child’s nurse heard the news, she picked him up and fled. But as she hurried away, she dropped him, and he became crippled.” (2 Samuel 4:4 NLT). Mephibosheth’s nurse who had the intention to keep him off harm’s way suddenly dropped him, maybe in a bid to save her own life! As a result, he became a cripple. Mephibosheth found himself in Lodebar, away from the palace, living beneath the life that God meant for him.

Unfortunately, there are people today who find themselves in the same situation as Mephibosheth; people whose lives have been crippled by the twists and turns of events. They have been dropped by those who may have had good intentions; people who had good desires for them, but somehow, suddenly dropped them and left them wounded and crippled for life. It could be a father who promised to be there for them but passed away and left them helpless; or a relation who promised to see them through education but dropped them midway because of change in circumstances; it could also be a friend who introduced them to what seemed like a ‘harmless’ indulgence which has now left them with life-long adverse consequences.

Just imagine what a typical day would have been for Mephibosheth – what could be going through his mind? Well, it is one thing if you’ve never lived in plenty, if you’ve never tasted the good life, and find yourself in Lodebar, you will miss nothing. After all, “he that is down fears no fall!” But if you’ve seen success, tasted the good life, and now live in Lodebar in a ‘face-me-I-face-you’ house, that’s a different story! It even gets worse when you discover that a man called Ziba, who should have been your servant, was living off your family’s inheritance!

No doubt, Mephibosheth’s self-image must have suffered terribly. His handicap left him feeling worthless and useless. No wonder he called himself “a dead dog,” (2 Samuel 9:8), one of the most derogatory terms that any Israelite would use to describe himself. So many people today have lost their sense of worth or value because of their handicap in life.

KINDNESS OF THE LORD

Mephibosheth would have died in Lodebar but grace found him. God’s grace located him and brought him to his rightful place in life. After David settled down on the throne he made an unusual enquiry: “Now David said, “Is there still anyone who is left of the house of Saul, that I may show him kindness for Jonathan’s sake?”” (2 Samuel 9:1). The usual practice was for a new king to wipe out the family of the former king, but here David was asking for someone to show kindness to. David wanted to demonstrate the kindness of the Lord.

So David summoned Ziba, Saul’s servant, “Then the king said, “Is there not still someone of the house of Saul, to whom I may show the kindness of God?” And Ziba said to the king, “There is still a son of Jonathan who is lame in his feet.”” (2 Samuel 9:3). Ziba’s response to David implied that Mephibosheth wasn’t qualified to appear before royalty because he was a cripple.

What Ziba did not realize was that David wanted to show “the kindness of the Lord.” It wasn’t something that Mephibosheth had earned or deserved. Moreover, Ziba was unaware that there was a covenant between David and Jonathan which provided for his descendants:  “And you shall not only show me the kindness of the Lord while I still live, that I may not die; 15 but you shall not cut off your kindness from my house forever, no, not when the Lord has cut off every one of the enemies of David from the face of the earth.” 16 So Jonathan made a covenant with the house of David, saying, “Let the Lord require it at the hand of David’s enemies.”” (1 Samuel 20:14-15).

One of the most recurring words in the Old Testament is the Hebrew word ‘Chesed,’ often translated “The kindness of the Lord.” It literally means “an act of kindness, love or mercy shown to someone.” Usually, the person does not deserve it. In this sense, it is similar to the word grace, which is ‘undeserved favour’. Chesed is at the root of God’s dealings with the children of Israel throughout their history.

God also struck a covenant with Jesus, our representative. Isaiah prophesied a lot about how Jesus would be given as a covenant of the people. “I, the Lord, have called You in righteousness, And will hold Your hand; I will keep You and give You as a covenant to the people, As a light to the Gentiles,” (Isaiah 42:6). Even more striking is Isaiah 49:8-9 “Thus says the Lord: “In an acceptable time I have heard You, And in the day of salvation I have helped You; I will preserve You and give You As a covenant to the people, To restore the earth, To cause them to inherit the desolate heritages. That you may say to the prisoners, ‘Go forth,’ To those who are in darkness, ‘Show yourselves.’ They shall feed along the roads, And their pastures shall be on all desolate heights.”” No other character in history met the above description other than the Lord Jesus Christ!

It seemed like God was in a hurry to restore Mephibosheth. When the day of remembrance comes for a person everything just tends to be on a fast track! It happened for Joseph (Genesis 41:14); it also happened for Mordecai (Esther 6:10); and Daniel (Daniel 6:23); it even happened for the ‘Prodigal Son’ (Luke 15:22-24 NLT). Mephibosheth had lived in this condition since he was only five years old, and now he already had a son! God didn’t want him to stay a day longer in that state.

God is also in a hurry to bring someone out of obscurity. You’ve been there for too long! “He raises the poor out of the dust, and lifts the needy out of the ash heap, that He may seat him with princes – with the princes of His people.” (Psalm 113:7-8). Just like Mephibosheth was restored to his rightful place in life, so can you. Everything that had been taken away from him was restored. When God restores you, people who have your stuff will begin to return them.

Mephibosheth would have died a pauper instead of the prince that God ordained him to be. God still restores people today not because they deserve it but because of His covenant with Jesus Christ. In these last days, God is restoring sons and daughters to glory because of Christ (Hebrews 2:10).

David was a beneficiary of God’s kindness. He would have been forgotten in the wilderness where he kept the “few sheep” that his father had, but God’s grace located him and subsequently defined his life. It was this same grace that brought David to the palace. Having experienced God’s kindness himself, he was willing to show it to another person. If those who have experienced kindness show it to others, the world will be a better place.

Also, the grace of God went to far away Lodebar to locate Mephiboseth. There are plenty ‘Lodebars’ all around us and people live there. People whom life had dealt a rough deal, who can’t help themselves. We need to go there and show them the kindness of God. Jesus said, “Freely you have received; freely give” (Matthew 10:8). Let’s be instruments in the hand of God to lift people out of desolate places to a better life. What God has used someone to do for us, we can do the same for others.